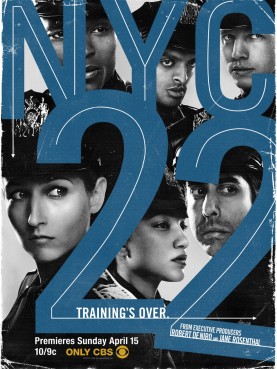 Richard Price’s relationship with television has always been complicated, even before he worked in the medium himself. His writing style, especially early on in his career, was influenced by TV’s ADD immediacy: “My writing is a product of being a tube child,” he wrote in a 1976 Village Voice op-ed, “and is geared towards other tube children, at least stylistically.” But on the other hand, he’s always seemed to hold the form in low regard, from the narrator of 1978’s Ladies’ Man maintaining that “everything… on TV… [is] geared for mental defectives” to the protagonist of 2003’s Samaritan wrestling with whether or not to take a “dopey” TV writing gig. Price considers screenwriting “superficial” compared to writing novels, so it makes sense that he’d be even leerier of cinema’s traditionally dumber relation.

But we are living in (or just coming out of) a Golden Age of TV Drama, and Price was finally coaxed into writing for the small screen by the opportunity to work on that Golden Age’s crown jewel, HBO’s The Wire. Price himself says that The Wire “isn’t really television,” both because of its disregard for the form’s usual storytelling restrictions as well as its limited capacity to produce income for its creators: “You open up the [paycheck] envelope,” Price says, “and moths fly out.” Still, he had technically become a TV writer, and that was enough to draw the attention of producers Jane Rosenthal and Robert De Niro, who had both worked with Price before and who needed a writer for a rookie cop show they were developing. (Price is credited as the creator of NYC 22, but the project seems to have originated with Rosenthal and De Niro.)

CBS is, of course, a very different environment from HBO in terms of both compensation (“I needed money,” Price told The New York Times when asked why he worked on this show) and creative freedom. A paradox of TV’s new Golden Age is that while cable programming has gotten increasingly explicit and experimental, network TV–never particularly prone to envelope-pushing to begin with–has despaired of competing and gotten even tamer and more averse to risk. So while the Big Three used to broadcast edgy cop shows like Homicide: Life on the Street and NYPD Blue, they no longer seem to be in the market for that kind of material. Could Richard Price buck that trend? As The Wire creator David Simon (who had plenty of experience with network interference during his years as a writer/producer on Homicide) put it, “If anybody can thread this needle and come out of network with something worthwhile, it’s a guy like him.”

Unfortunately, Price didn’t pull that off. But you can tell that he tried, despite his supposedly mercenary motivations.

NYC 22 (pronounced “two-two”), which aired for thirteen episodes in 2012 before being cancelled after one season, concerns the misadventures of six rookie cops serving in Harlem. Although there are recurring storylines, most episodes are fairly self-contained, following the rookies (usually separated into a variety of pairings) as they struggle to stay on top of the shenanigans and crises that are constantly popping up on their beat. 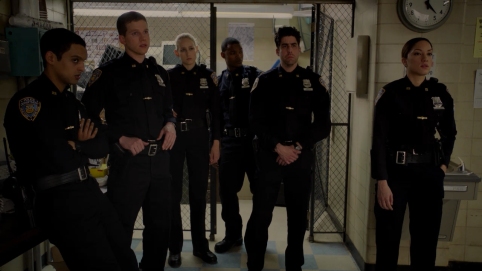 When you compare NYC 22 to its ABC doppelganger Rookie Blue (at least, judging by the Rookie Blue pilot episode I watched), it’s apparent that Price (who, in addition to creating and producing the show, is credited as having written four episodes) was attempting to create something more ambitious than your standard cop drama. The characters here are generally competent and likable rather than being conflict/wisecrack-generating caricatures. There are some will-they-won’t-they romantic subplots, but not so many that they overwhelm the show; the narrative focus remains on the actual job of police work. And, most of all, the storylines continue Price’s tradition of drawing too-good-to-be-made-up anecdotes and characters from the urban milieu around him, from an episode about longtime neighborhood residents barricading themselves inside their apartment building before it can be torn down to make room for a condo to the small detail of a street hustler taking bets at a crime scene on the nature of the offense. At its best, the show derives memorable and pointed moments from the stark economic contrasts and constant evolution of its setting; witness the darkly funny dialogue from the climax of the episode “Self Cleaning Oven.” (“What the hell is SoHa?”)

The problem is that those positive characteristics exist mostly on the level of broad strokes. In terms of execution, NYC 22 feels very much like a network show. The lead actors are skilled but implausibly model-pretty. The musical score is bland and overbearingly omnipresent. The storylines, though often based on intriguing premises, are blown up to crazily exaggerated proportions (the hostage situation in the pilot, the bar heist/shootout in “Crossing the Rubicon”) and almost always wrapped up with neat and morally satisfying conclusions by the end of the hour.

I assume that this stuff is mainly due to mandates and interference from CBS, not just because I’m a fan of Price but also because these flaws run counter to his usual habits as a writer. His narratives tend to be shaggy in their indulgence of characters and environmental atmosphere; “none of my books historically has been tightly plotted,” he admits. So the fact that this series adheres pretty slavishly to A-plot-B-plot/three-act structure indicates that he probably didn’t have carte blanche creative control. The show’s obscurity means that there isn’t much behind-the-scenes info available, but Price does say in this New York Times article that “What I didn’t want is a show where everybody is a hero every two seconds, and shots are fired every three seconds. I try as much as I can, given the mandates of a major network, to keep it quiet. And it’s not easy.” And there is some hard evidence that CBS wasn’t too concerned with NYC 22‘s narrative integrity: They aired the episodes out of order, leaving viewers to wonder why the characters never seemed to mention whatever romantic shakeups or traumatic near-death experiences had occurred the week before.

Price’s authorship is still discernible, but mainly on a superficial level. There are the usual dialogue snippets familiar from other works, like a reference to police work as “sweeping leaves on a windy day” (a phrase Price also used in Freedomland and The Wire) and a comparison between a drunk’s eyes and “two cherries floating in buttermilk” (Lush Life, The Whites). Episode titles like “Ransom” and “Samaritans” seem to nod to earlier entries in Price’s oeuvre. And while I didn’t catch any Obligatory Richard Price Cameo, check out this T-shirt worn by Genevieve Hudson-Price (Price’s daughter, who has a recurring role as a cop with slightly more experience than the rookies) in “Samaritans”: 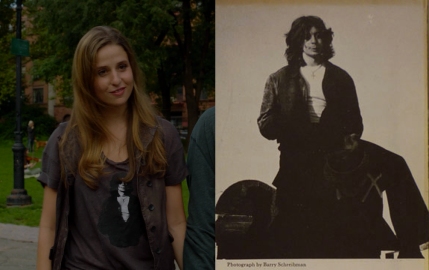 Left: Genevieve Hudson-Price in “Samaritans.” Right: Richard Price author photo from an early edition of The Wanderers. If anyone’s thinking about what to get me for my birthday, that T-shirt is pretty sweet…

Those Richard Price trappings don’t compensate for the lack of Richard Price style, though. NYC 22 isn’t a terrible show, but it’s compromised in the most fatal way: Not pulpy enough to work as disposable amusement, but not nuanced or innovative enough to satisfy people looking for something more substantive. In the end, the best thing about it is that it presumably did, in fact, earn Price some big paychecks. He deserves the money, just not because of this.

•  Fans of The Wire will recognize a few of the guest performers in this show’s cast, including John Doman (The Wire‘s Bill Rawls, a character similar to the one he plays here) and Michael Kostroff (The Wire‘s Maury Levy). 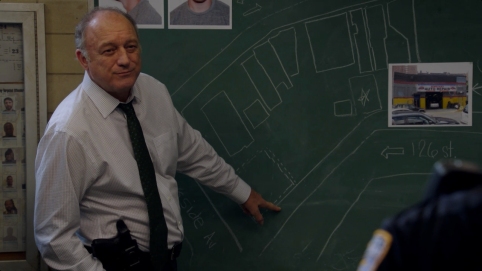 •  NYC 22 features the latest (but probably not last) use of Price’s trademark line “Guy wiggles his fingers and five people die in Oklahoma,” phrased here as “Guy would wiggle five fingers on 111th, and five people would die on 145th.” Variations on that line have so far shown up in Clockers, Night and the City, Shaft, Lush Life and even Price’s DVD commentary for The Wire.

•  An interview David Simon did with The New York Times as part of this show’s promotional push ended up spawning a ton of chatter about how we consume TV and indirectly inspired Simon to start his own blog in order to communicate more directly with his audience.

•  Judging from the excerpt posted online, Price’s new novel The Whites may present a relatively unrestrained exploration of some of the themes and subject matter covered here. And speaking of The Whites, yesterday brought yet another positive review, this one from The New York Times‘ Michiko Kakutani.

Next week: Richard Price’s new novel The Whites hits shelves, and this blog comes to an end.