I’m going to have to advise you not to trust my opinion on this movie. I don’t like it very much, but a lot of people seem to feel differently: Critics generally praised it, and a scan of Netflix and YouTube comments reveals a lot of affection for it among casual viewers. And that’s not surprising, as the whole project looks great on paper: The book was great, the book’s author co-wrote the screenplay, and Spike Lee would be on anyone’s short list of dream directors for the material (alongside Martin Scorsese, who was originally attached to direct and ended up serving as a producer). So I have to admit that it’s entirely possible I’m just being an obnoxious fanboy, turning up my nose at a valid adaptation and whining that “the book was better.”

The script, written by Richard Price and then revised by director Spike Lee, sticks fairly close to the original novel’s story: “Strike” Dunham (Mekhi Phifer) is an anxious, self-conscious black youth who works as a mid-level drug dealer in his local housing project. His boss Rodney (Delroy Lindo) hints to him that another local dealer “got to be got,” and when that guy winds up dead, Strike is the number one suspect in the investigation led by middle-aged white homicide detective Rocco Klein (Harvey Keitel).

I don’t even have any beef with the most of the ways in which the film does differ from its source material: The action is relocated from Price’s fictional New Jersey city of Dempsy to Brooklyn, New York, but that alteration plays to Lee’s strength as a chronicler of the borough without undermining any crucial aspects of the story. And I can’t blame the movie for focusing on Strike at the expense of the glimpses of Rocco’s personal life we got in the novel (glimpses that help answer movie-Strike’s question “Why were you so gung-ho about all this shit, man?”); a feature film only has so much time to work with, and Strike’s storyline is the more dynamic of the two.

While I’m focusing on the positive, I should also note that Clockers is extremely well-cast. Although the posters refused to acknowledge newcomer Mekhi Phifer’s existence, he does an impressive job in what is basically the lead role; it’s hard to imagine a better fit for his streetwise vulnerability. While it’s tempting to lament that Robert De Niro abandoned the role of Rocco when Scorsese departed (no pun intended) as director, I doubt even De Niro would’ve done a better job with the detective’s mix of playfulness and weary frustration than Keitel does here. And, as with many Price projects, there’s a whole roll call of cool character actors in the supporting cast, including John Turturro, Isaiah Washington, Keith David, rapper Sticky Fingaz, Michael Imperioli, Paul Calderon (also of Sea of Love and Kiss of Death), Michael Badalucco (the Elaine’s bartender in Night and the City) and even a few future cast members of The Wire, Fredro Starr (who played the TV show’s “Bird”) and Hassan Johnson (“Wee-Bey”).

But the stylistic execution of the movie bothers me, first and foremost the totally overbearing soundtrack. Rare is the scene that isn’t backed by either Terence Blanchard’s achingly earnest Oscar-highlight-reel orchestral score or the soulful R&B of Seal, whose songs were seemingly chosen purely because of how distinct they are from the gangsta rap sound that would seem to be a more obvious choice for this subject matter (though there are some rap snippets utilized as well). And not only is the soundtrack almost constantly either thuddingly on-the-nose or weirdly disconnected from what’s going on in the story, it’s also often mixed so loud that it begins to drown out the dialogue. I hate to focus so much on what would seem to be a minor aspect of the film overall, but good lord did I find the music here distracting.

The movie’s visuals present some similar issues, though their inventiveness provides some pretty cool moments too, making them more of a mixed bag. Lee and cinematographer Malik Hassan Sayeed seem to be constantly trying to grab the viewer’s eye (“Spike does some amazing visual things with his movies,” Price has said of this film), making use of slow-motion, shallow focus, bicycle camera mounts, eyeball reflections, and even a somewhat goofy video game simulation. And, most prominently, the image’s exposure, saturation and grain vary wildly, sometimes to indicate flashbacks or fantasy sequences and sometimes for no apparent reason whatsoever. The most extreme examples of this are probably the scenes that take place in what seems to be the most dramatically lit interrogation room in cinematic history, which is really saying something:

Your mileage with this stuff may vary. Lee’s in-your-face filmmaking style is a far cry from Price’s gritty, precisely realistic prose, but it’s also captivating in its own way.

To return to the narrative content, though, there was one deviation from the book that bugged me almost as much as the soundtrack: For some reason, movie-Strike is obsessed with trains. He flips through a model train catalog while overseeing his underlings (just as a minor “clocker” character in the novel perused a toy catalog), and everyone in the neighborhood seems to be aware of his fixation; he’s even got a huge model railroad set that gets shown off in a grand pull-back shot that practically screams “ACADEMY AWARD, PLEASE!” And hey, guess which mode of transportation happens to figure prominently in the movie’s conclusion? 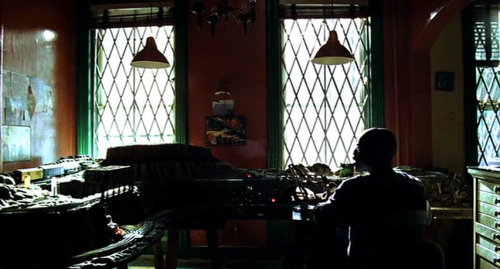 This little quirk bothers me to no end, partly because it seems like such an obviously reverse-engineered source of dramatic irony (“You love trains, but you’ve only ridden the subway!”) rather than a natural extension of the character, and partly because who cares if Strike likes trains? Why does he need to be some sensitive dreamer blossoming up through the ghetto concrete for us to sympathize with him? Can’t it be enough that he’s a regular guy stuck in a horrible situation?

But I have to admit that even that flaw is arrived at honestly: Spike Lee obviously cared a lot about this project, and to the extent that it fails, it does so because he overreaches in his ambition to make it a unique and affecting experience. As with the novel, I respect the dedication shown to telling a story rooted in real-world issues rather than regurgitating tropes from blockbusters or clichéd indie dramas, even if the effort wasn’t entirely successful (though, again, a lot of other people seem to feel that it was).

And hey, this is at least more satisfying than the Bloodbrothers adaptation. But still–the book was better.

•  There was a lot of money behind this project: Universal famously bought the film rights to the original novel for $1.9 million before the book had even been published.

•  In addition to the wide array of notable actors in the cast, Clockers also features several notable cameos, including Calvin Hart (a Jersey City detective who helped Price with research and was the basis for Clockers‘ André the Giant and Freedomland‘s Det. Lorenzo Council), Larry Mullane (another Jersey City detective; he also served as a technical consultant here) and director Lee himself. (Supposedly, anyway; I couldn’t actually figure out where Hart’s “Guard #1” or Mullane’s “Larry the Narc” show up.) No Obligatory Richard Price Cameo this time around, though! 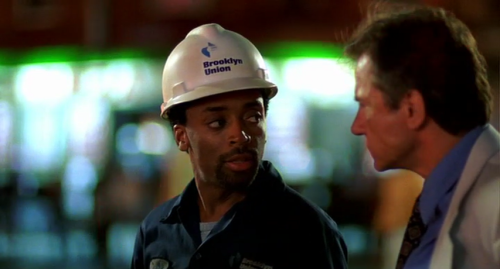 •  The Wire appropriated several scenes from the novel Clockers, but not any of the ones used in this film (though Strike’s interactions with his subordinate dealers will probably remind you of D’Angelo Barksdale shooting the shit with the other members of the pit crew).

•  In the book, Strike treated his ulcer by constantly chugging Yoo-Hoo. Here, his beverage of choice is the fictional “Moo.” A golden product placement opportunity, wasted!

•  In case you were wondering, the crime scene photos shown during the opening credits are apparently not real.

•  Apart from his comment about Lee’s visuals, Price has said that this film is hard for him to evaluate in and of itself: “In a way I can never watch the movie, because everything I’d see would take me out of the movie and back to the script, back to Spike’s script, back to the novel, back to the experience that provoked the novel. I could never follow the damn thing, because my mind would keep taking me away.”

Next week: Price teams up with Mel Gibson and Ron Howard for the 1998 thriller Ransom.