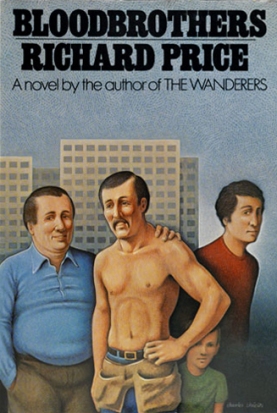 Bloodbrothers, Richard Price’s sophomore novel, might be the most painful reading experience he’s produced (with the possible exception of Freedomland), not because it’s bad–it’s well-written, gripping, feels true to life–but because it’s so God damn sad.

That’s a weird thing to point out about a Richard Price book, all of which are at least somewhat sad in one way or another. But while other novels of his might draw their pathos from, say, gang wars or racial strife, Bloodbrothers is about familial violence: Husbands abusing wives, parents abusing children, children rejecting parents. There’s something particularly depressing–or maybe just claustrophobic–about all that hurt being spread around among the people who are supposed to be most devoted to each other. But if that subject matter often makes for a tough read, well, I guess it probably should, shouldn’t it?

The family in question is the de Cocos, residents of the Bronx’s Co-op City housing projects, and our protagonist is the clan’s eldest son, Stony, a teenager who’s just gotten out of high school. (I didn’t notice the action ever being pegged to a specific year, but it’s definitely set more or less in the “present day” of the book’s publication rather than being a period piece like The Wanderers.) Stony’s father, Tommy, is pressuring him to continue the family business of working in the electrician’s union. Stony, however, is more interested in working with kids, a path which seems to become a real possibility when he gets a low-level job in the children’s ward of a local hospital. But as his own dreams begin to draw him away from his family, he’s held back by feelings of responsibility for his eight-year-old brother, Albert, an adorable but meek anorexic who’s being abused by their psychological wreck of a mother, Marie.

In broad strokes, the subject matter–an Italian teenager growing up in the projects of the Bronx–seems to make Bloodbrothers a companion piece to The Wanderers. Stylistically, though, it marks a huge evolution in Price’s style, its tone feeling more like that of his later books than that of his debut.

For one thing, while The Wanderers was a comedy at heart, this book–as you’ve probably already figured out–is not. That’s not to say that Price has lost his sense of humor (“the first sign a somebody goin’ crazy,” according to Stony’s uncle Chubby), but this time around the laughs seem to arise organically from realistic situations rather than from reality having been heightened into farce. There are some hilariously absurd visual set pieces, like a toilet paper fight between Tommy and Chubby, or a jive-talking hospital trainee cheerfully manhandling a training dummy, but they’re funny because you can picture them really happening, not because they come off like a cartoon. (As for the part where a hospital janitor cleans vomit off of a paralyzed man with a mop, well, it’d be nice to think I can’t picture that really happening.) But while Price still dots his prose with playful turns of phrase (“Stony wasn’t in love with the idea of more school, and more school wasn’t in love with the idea of Stony”), for the most part he no longer seems to be mocking his characters, just relating their stories.

And again, the pain of the sad parts outweighs the joy of the funny ones. There’s only one full scene of Marie abusing Albert, for example, but it’s so brutal, emotionally and physically, that it’s totally sufficient by itself to establish the stakes of that subplot.

This more serious tone allows for deeper characterization. Some of the kids in The Wanderers could seem interchangeable at times, which was in keeping with that book’s broader approach, but the personalities at play in Bloodbrothers are defined more precisely and vividly. Stony’s the most prominent example of this, of course: He’s sympathetic because of his warmth towards kids and his desire to decide his own fate, but he’s also violent, racist and kind of dumb. Early on he spends an evening stalking his sort-of girlfriend, getting into a fight from which he has to be rescued by his uncle, and having sex with a prostitute. As they say on Mystery Science Theater 3000: Our hero, ladies and gentlemen! But Stony’s positive qualities shine through despite the negative ones, and, most importantly, the two don’t contradict each other.

And just because the plot turns on Stony’s decisions about his future doesn’t mean the supporting cast gets short shrift. In fact, Price treats the book like an ensemble piece, frequently shifting focus away from Stony for extended passages following other characters like Chubby or Marie. Even tertiary characters like Tommy’s bartender or Albert’s doctor are given extensive backstories; on the book’s third-to-last page we’re being filled in on the home life of a project security guard we’ve only just been introduced to.

Again, though, Stony’s at the center of it all, and he’s the first of several Price protagonists (including Kenny Becker of Ladies’ Man, Peter Keller of The Breaks and Ray Mitchell of Samaritan) who, in keeping with the author’s affinity for the spoken word, are at their best when they’re running their mouths. Bloodbrothers is full of graphic violence and sex, but its most memorable scenes are the ones in which Stony talks with the kids in the hospital, nervously trying to raise their spirits with good-natured jokes and partially improvised folk tales. Actually, that’s another thing that singles this book out: In contrast to many of Price’s other works (comedies like Ladies’ Man and The Breaks excluded), the stakes here for the most part aren’t life-or-death, at least not in an immediate sense. But the book’s world is still so fully realized that a casual conversation can convey the same dramatic weight and tension that a lesser novel would reserve for a Mexican standoff.

•  As in The Wanderers, racism is omnipresent, but it’s just presented as part of the characters’ environment, not something to be confronted or overcome. Stony himself throws around the n-word and rejects the one college he can get into when he hears that its student population is mostly black, but he’s also immediately compassionate and warm towards the black kids he meets at the hospital. Prejudice isn’t a conscious ideology for him. It’s just the air he breathes.

•  Tommy and Chubby apparently worked on Freedomland, a Bronx amusement park which would provide the name for Price’s 1998 novel.

•  After arguing with his friend Butler, Stony gets short with some of the kids at the hospital, one of whom complains, “You sound like my mama.” Stony responds, “Baby, this afternoon, I’m everybody’s mama!” Price seems to have sort of re-used this line in his screenplay for Sea of Love, in which Al Pacino shouts, “Come the wet-ass hour, I’m everybody’s daddy!”

Next week: Richard Gere tackles the role of Stony de Coco in the 1978 film adaptation of Bloodbrothers.